A downloadable game for Windows

Roui, a resilient city dandy, a decipherer, a half-educated jeweler and the author of scientific magic articles, was met with a colossal failure and must return to his gypsy homeland: Latori. Ciphers aren't a thing here, and local shoddy mystical beliefs are really irritating and dejecting to Roui. He dreams to return to his old life... But how can it be possible if you have no money? In search of quick earnings, Roui has picked up his old jewelry tools once more and seeks out customers himself. Roui’s latest customer has charged him with a task to make a bracelet from a special wood for his bride – due within a month! But, as soon as Roui gets to work, strange and unpleasant things start to appear. Which, due to the superstitions of the local people, became much more horrific and absurd than they actually are. Roui apparently isn't meant to finish the work on the bracelet... because it was stolen! An unexpected helper says that the bracelet was taken by the legendary Latorian spirit - the Mad Rook. Is the Rook real or is it just her sick imagination? Roui has no time to figure out the details - he has to believe the helper and start looking for the bracelet as soon as possible, all while incidentally deciphering the mysterious cryptograms he'll be facing along the way.
Will Roui succeed and get the bracelet back? And what's waiting for him at the end of his long and full of mystical riddles journey?

Age 27, pure-blooded parba A creative mind and a passionate young man, who is stuck in a place where he doesn't belong, working at a job he is not the least bit proud of. He is skeptical of magic and "magicians" in general. Personal quote: ""No, I don't believe in magic... And I hate paprika!"

Age 25, pure-blooded parba An extremely, uh, “strange" girl who will be part of your- and Roui's- story, but let's not spoil anything!

Where is it set?
The setting is a fictional world called Shang-La, a world of mixed cultures and eras, and home to various strange creatures. This is a place of old magic and new ideas, where science works together with mysticism. You can find glasses and phones, electricity and radio here, but no guns or television. The inhabitants of this world still fight with swords. The continent they live in is surrounded by the boundless ocean. The Sun and the Moon take turns alternating in the sky, and the stars are made of metal and hiding tons of secrets in them.

Who are the Sahash?
Sahash are the second intelligent race in Shang-La, alongside humans. They are divided into five nations, differing from each other by their physicality, shape of their horns, and muzzles. Every nation has its own unique traditions and culture: ranging from habits, religion, law, and even tastes in fashion and food.

Despite the complicated relationships between these ethnic groups of Sahash, as a whole they get along with humankind, and even try to emulate them in spite of their more animalistic nature.

Playing our game, you will be able to:
✦Communicate with multiple characters, forge friendships, and make bitter enemies. Your words carry meaning and every piece of dialogue you speak will affect the story. Choose your words carefully! As the saying goes, "A word once spoken is past recalling".
✦ Decode ciphers!
✦ Collect strange items and use them to get yourself out of tight situations. Those items could be given as gifts for the characters you like, or used in magical stuff!
✦ Explore the world of Shang-La and meet unusual creatures, animals, spirits, and ghosts.
✦ Choose who you wish to become - the hero or the villain. But be prepared for the consequences, as neither choice comes without them.


In our game you will find:
✦ A mix of a visual novel and a point-and-click genre!
✦ Animated sprites
✦ An original, richly-crafted world with intriguing concepts
✦ Atmospheric OST
✦ A few episodes of the game
✦ Plot twists!
✦ A few different endings of the each episode

Support us on Patreon! ►

All of this money will go to the game creation - to pay our coders and musician, and also make more animations and HD cutscenes!

We are a small team consist of 3 artists (Lins & Grimm aka Lingrimm and Natalie de Corsair) from Moscow, Russia that has been crafting our fantasy world of Shang-La for 5 years. The Crown of Leaves is not our first project and we are currently working on a comic book, and do small comic projects from time to time. The realm of game creation is new for us but we wish to learn more about it and create further projects down the road. This will help us share our ideas with those who take an interest in fantasy and share the same passion for it that we do.

We also have a musician in our crew, the amazingly talented Russian composer _Blacksmith_ . He is writing original music for "Crown of Leaves".

Valve company has finally approved the store page and the demo version of our game, which you can download directly on Steam now! And here on Itchio too. Our beta testers on Patreon have already checked the Crown for bugs (it's all fixed, hopefully) and already sized the possibilities of new improvements and functions.

On Patreon, we have already spoke about our new coder, who helped us to implement and refine some of the features in the game. But please allow us to introduce him again — Danil Zainullin aka mold.FF.

Important note! When you start the game, first of all, check the control settings. You can find them in the Miscellaneous menu.

Note: pay close attention to details while playing the demo! Although demo is short, it hides a couple of surprises in. Mindscape will hint on them: all the articles should be available when you finish, but, if not … then you have missed something.

Play and re-play our demo, write reviews, make a video (<<<THIS) – we would be really happy if you do!

Changes:
- New translation system. You may think that this is not so important, but technically it is much simpler than the standard Ren'Py system. This will help our translators and localizers to easily add new languages to the game!
- Technically the new inventory and Mindscape;
- Crafting system. Now you can combine items by switching to the Item Creation screen. There are only two recipes in the demo. But there are much, much more items to collect!
- Redraw some background details, added background animation.
- Added the ability to view the bulletin board;
- Added and updated some of the dialogues;
- The system of relations with Serban and Vander has been slightly improved. Serban may not want to talk to you now, and Vander will not just be so offended by you;
- Don't forget about the additional dialogues. If you are friends with the character, you can learn something new about them. Do not forget to look at Mindscape too!
- Some characters can leave locations that will give you the opportunity to look around more closely;
- New puzzle screen and the puzzle itself! We made it easier and more “in-setting”;
- New music in the first scene with Vander;
- New menu sounds.

I enjoyed the original demo a couple years ago. Are there any plans to release the full version for Mac? Thank you!

aaaAAA i need the full game ! so awesome! and the artwork is amazing.

I absolutely love the demo so far! Can’t wait to learn more about the world of Shang-La! Though I do have the ability to wait, so please take your time and do not overwork yourselves/yourself. That’s not good for you.

I really liked the demo, the world is well built and the characters interesting. besides that the dialogue is well written and the artstyle is simply beautiful. definitely can't wait for the full release on steam to play what's sure to become a gem of a game

Everytime I see new stuff for this game I get so excited! I'm holding back to play until it's all done because I know I won't be able to wait!!! <3

Reply
The Broken Horn3 years ago(+1) 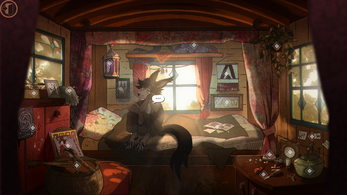 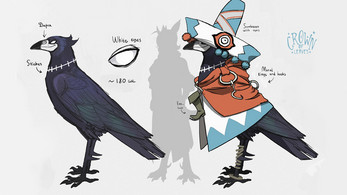 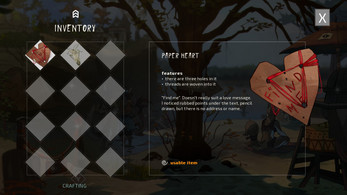 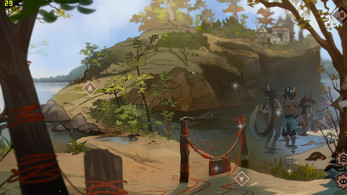 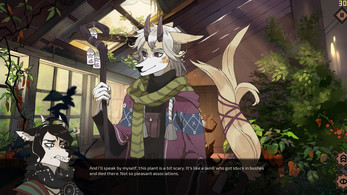 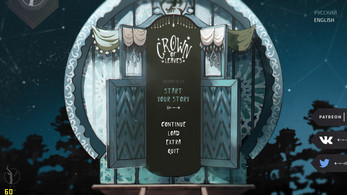